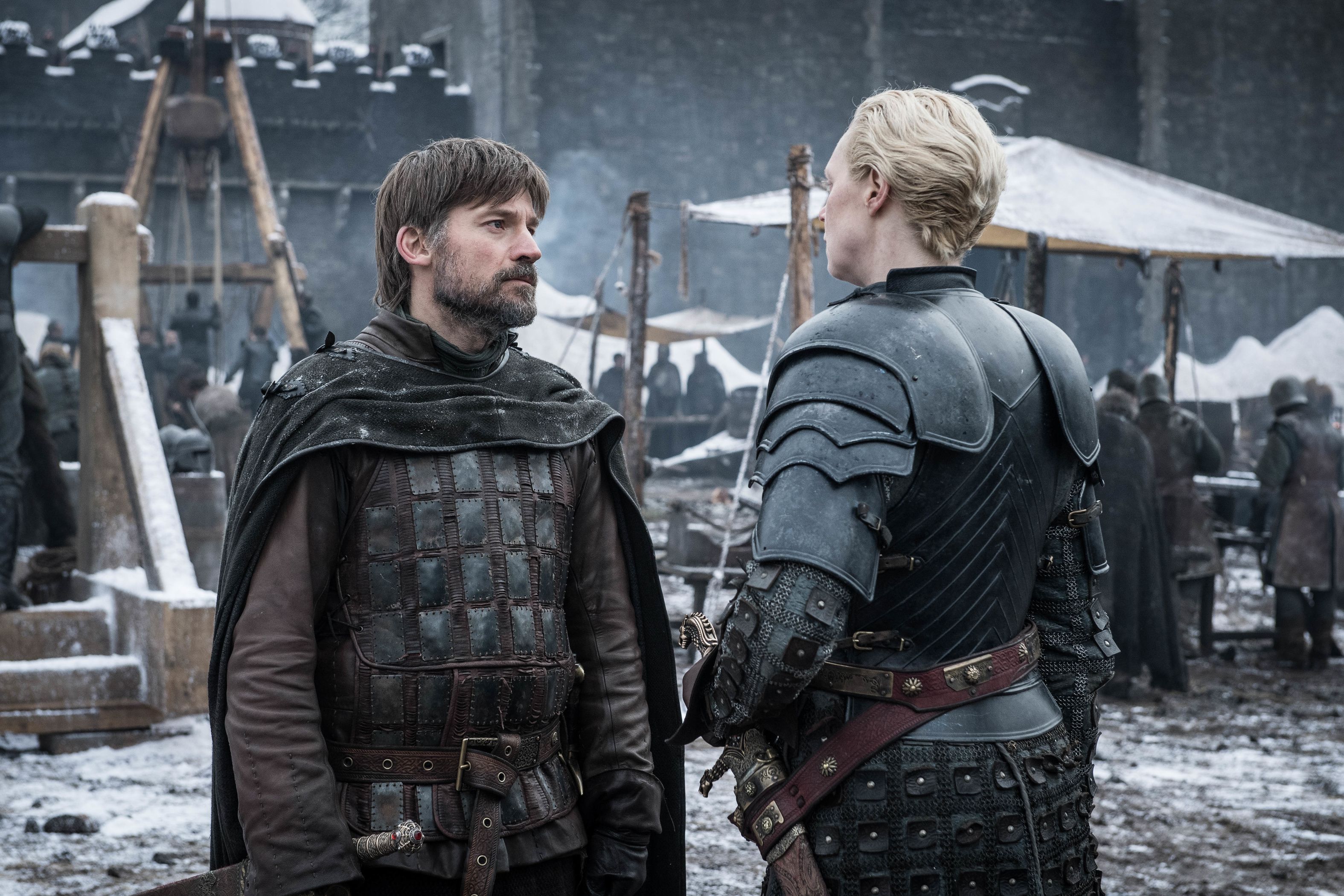 The second installment of the final season of Game of Thrones picked up pretty much right where the last episode left off, as Jaime Lannister, after turning on his wicked sister/lover Cersei Lannister, arrived in Winterfell  in hopes of making amends with the Stark clan and joining the good guys in their upcoming battle against the dead. And apparently Bran knew all along that Jaime would show up, especially since he’d sat outside in the blistering cold watching and waiting for, what he called, “an old friend.” 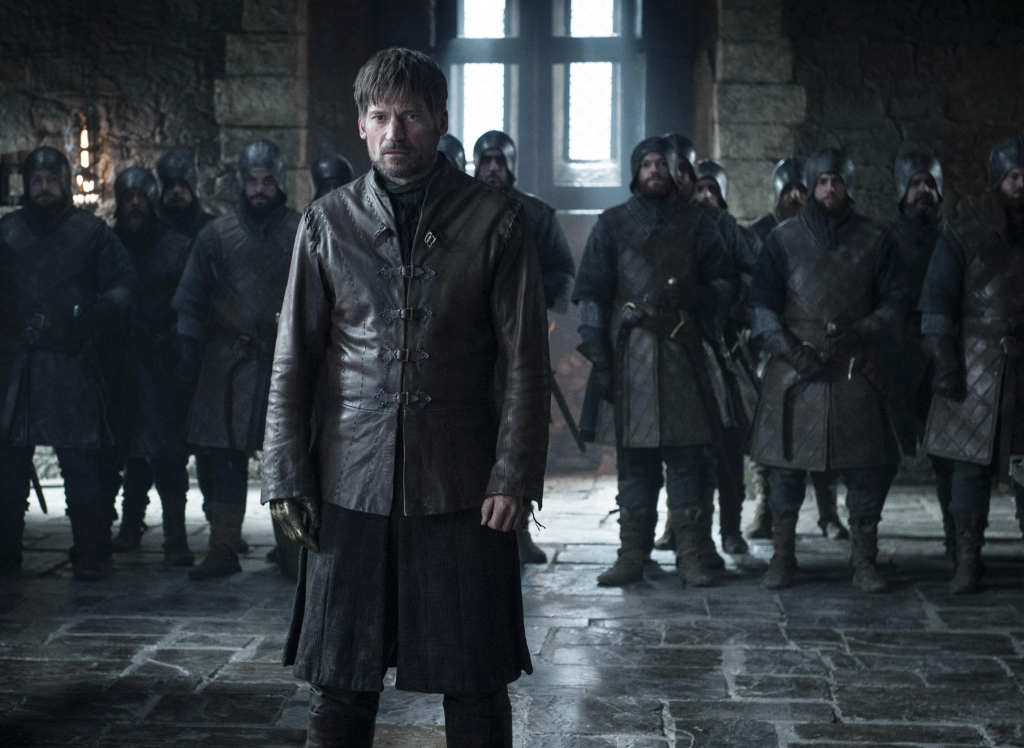 Once Jaime arrived, of course he was put on trial for all the fuck shit that he’d done in the past. Well, most of it, anyway. During his arraignment, Jaime stood before Jon Snow, Daenerys, Sansa, and Bran to plead his case, but Daenerys wasn’t trying to hear what he had to say. She lit in on Jaime’s ass as she pointed out that he couldn’t be trusted because he’d killed her father, King Aerys Targaryen, and had been nicknamed the King Slayer among all seven kingdoms. There was no way that she was going to join forces with the man who murdered her father. 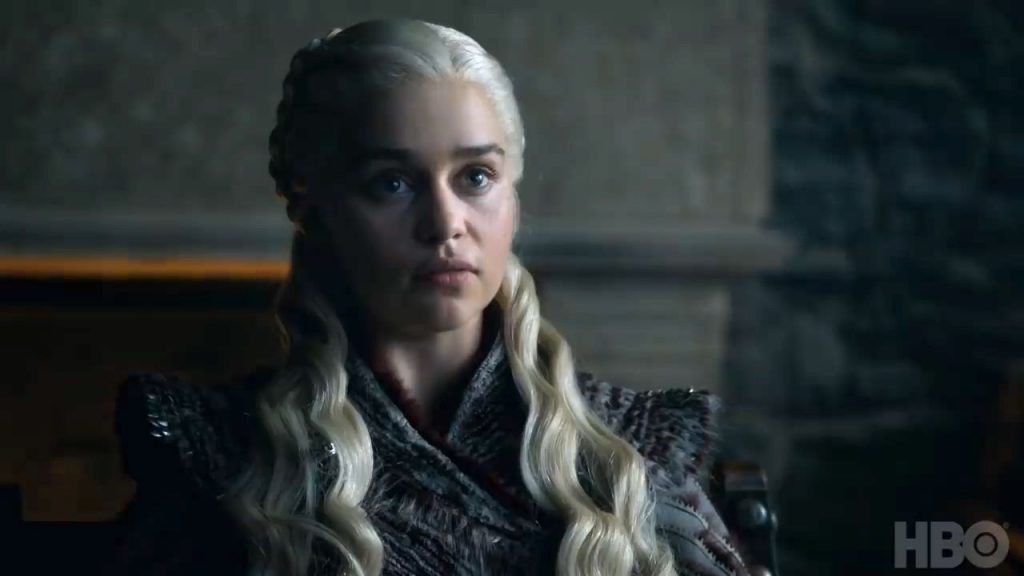 When it appeared that Daenerys was winning her argument, in steps Brienne of Tarth, Sansa’s loyal protector.  Brienne defended Jaime, saying that he wasn’t the man that he used to be and that he could be trusted. Yeah, she vouched hard for him. After hearing Brienne go hard for Jaime, Sansa immediately softened her harsh glare and declared that since she trusted Brienne with her life, she also trusted her testimony when it came to Jaime Lannister.  But, I’m pretty sure that wouldn’t have been the case if she really knew that Jaime was the one who pushed Bran out of that window, leaving him paralyzed, all those years ago.

Although Bran sat through Jaime’s trial, he decided not to mention that Jaime tried to kill him after he witnessed him and Cersei having sex in a tree house. I guess he figured that was a moot point, since they had bigger fish to fry, seeing that the white walkers are on all their asses. 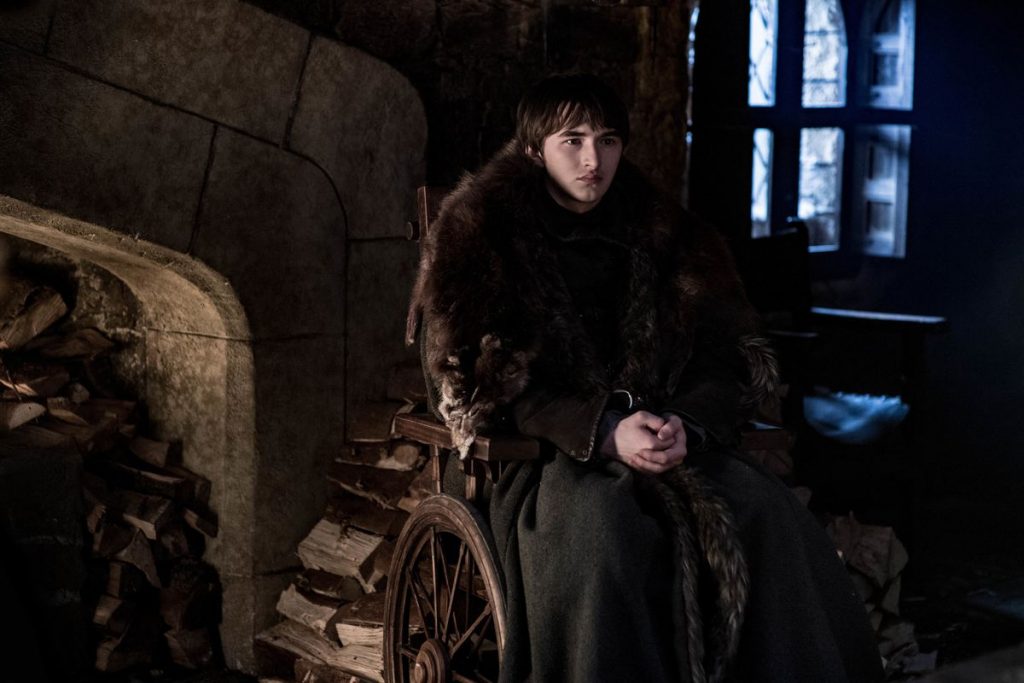 Jaime, no doubt, feeling guilty, met up with Bran at the weirwood tree afterwards, and apologized for the attempted murder on him and asked him why he failed to rat him out during the trial. Basically, Bran was like what was done was done and now they need to come together and try to figure out how to defeat the white walkers. In my opinion, Jaime should’ve been locked up with the Drogon and Rhaegar for a few hours, with them spewing a little harmless fire near him a few times,  to show him that the North doesn’t forget. But, that’s just me. 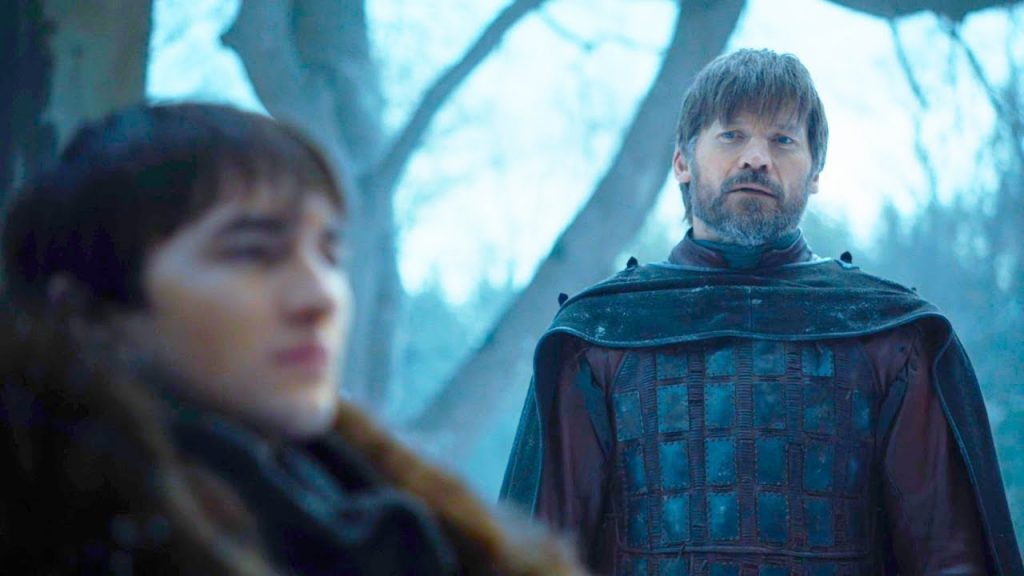 Further into the episode, the audience had the pleasure of seeing most of the main characters come together under one house. They all joined and discussed the battle plans and how Bran was going to be used as bait to help defeat the Night King and the army of the dead.

Some viewers were upset that the writers didn’t spend too much time providing details on how Winterfell planned to kick the white walkers asses.  What would be the point of them doing that, while everyone who watches this show knows that the epic battle scene is supposed to take place in Episode 3? Can we just wait for the surprise and shock? Why do we need to know everything up front? Sheesh! 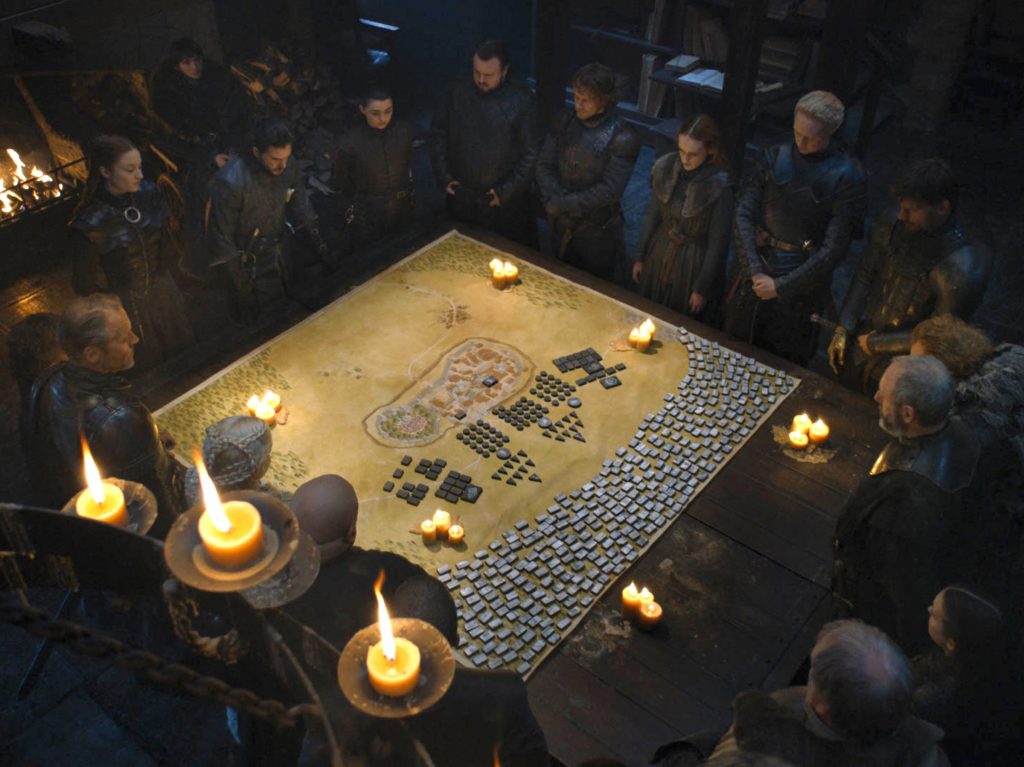 Speaking of surprise and shock, I did not expect to see Arya and Gendry in a full-on sex scene. Nobody did. My timeline went crazy once every realized that Arya propositioned Gendry to take her virginity. I mean, we knew that she was being all flirty-flirty with him and there was a romantic element floating around between them. But, we didn’t expect to see little Arya, who we watched grow up on this show, get butt-naked and downright nasty with Mr. Gendry.  She was like, since they’re all probably going to die anyway, she wanted to see what sex was about and Gendry was her choice. 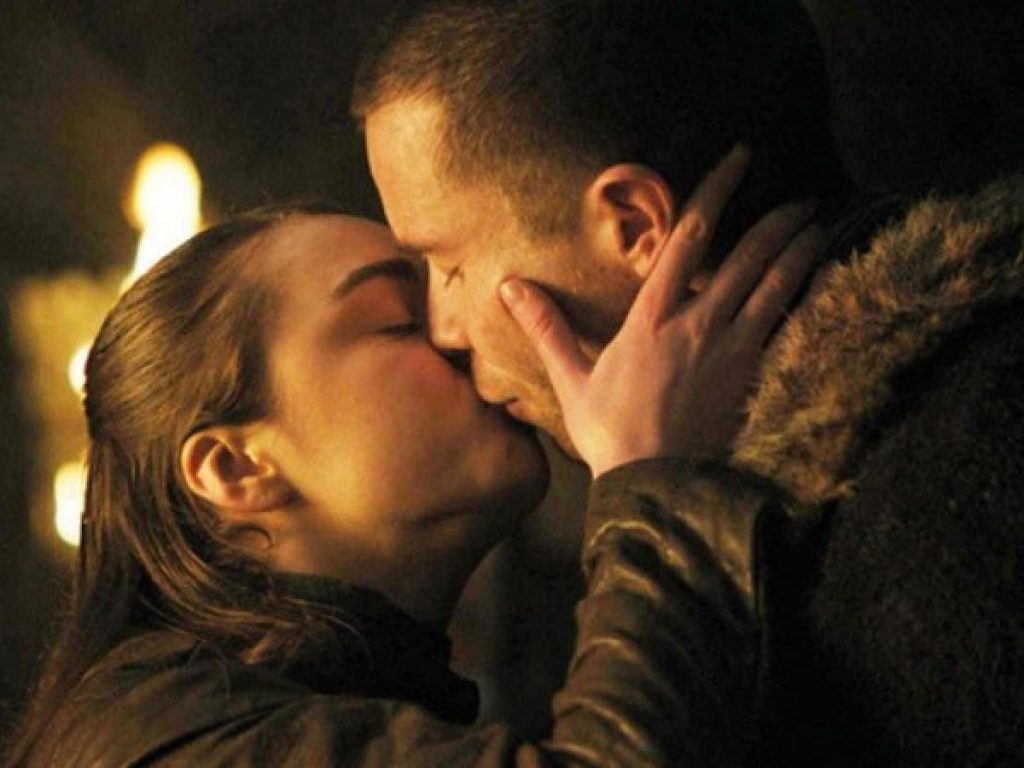 While Arya rode Gendry into the sunset, in another part of Winterfell, another “first” was happening. The meeting around the fire,  which included Tyrion, Brienne, Podrick (Brienne’s squire), Tormund, Jaime, and Sir Davos Seaworth, consisted of them drinking wine and sharing war stories from times before.

During the conversations, Tormund questioned as to why Brienne wasn’t a knight like her male counterparts. She immediately told him that women couldn’t be knighted because of tradition. Tormund, who became one of my favorite characters in that moment, wasn’t trying to hear that. He called bullshit and declared that if he was a king, he wouldn’t hesitate to make her a knight, seeing that she’s probably the baddest bitch that he knows.

Jaime, then, clarified that it doesn’t take a king to knight someone; another knight could do it. Jaime, after everything that Brienne had done for him, took it upon himself to do the honors of knighting his friend. That was definitely an emotional moment for Game of Thrones fanatics and Brienne stans. I admit that I was pretty damn choked up during that scene. Watch it below:

While in another part of Winterfell, Daenerys attempted to use her charms on Sansa to get on her good side and make her see her way of things. But, Sansa didn’t buy Daenerys’ niceties and I wasn’t mad about it. It was plain as day that Daenerys thought that she could go in and approach Sansa and get in her head like she has managed to do with most of the men that she has come in contact with. But, she failed to realize that she wasn’t talking to some little dumb kid or some googly-eyed man who was mesmerized by her blonde locks, her dragons, and her Olivia Pope-style trench coat. Sansa has been through too much and her eyes were wide open to what Daenerys was trying to do. 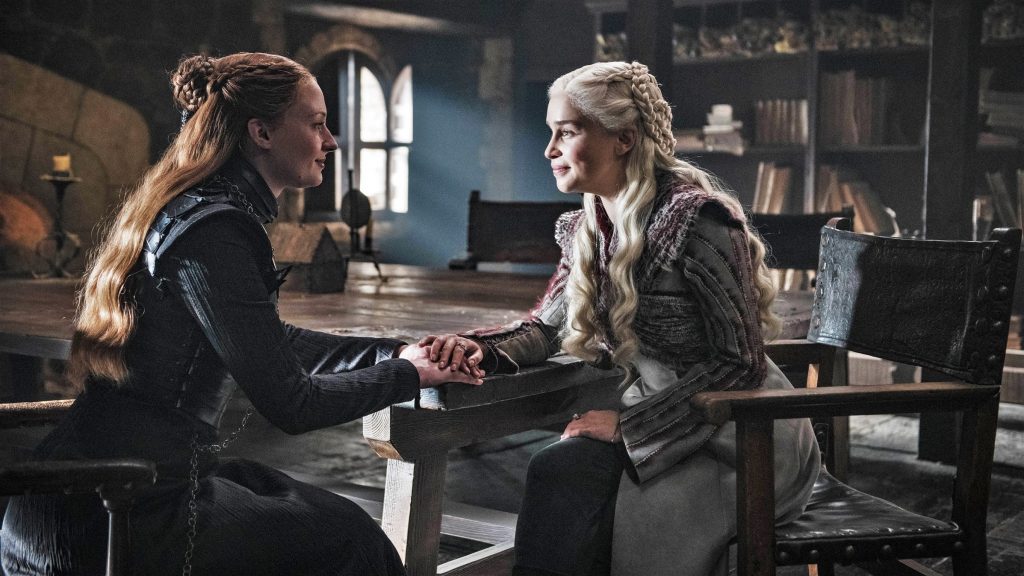 After she flopped in turning Sansa in her favor, Daenerys was hit with a bigger gut punch. Jon Snow, who’d been avoiding her ever since he found out that he was a Targaryen, dropped the bomb on Daenerys. He told her everything and of course she tried to rebut his claims straight out the gate. Daenerys refused to believe him at first, since the news originated from Sam Tarly and Bran, but Jon shut her shit down and declared that it was indeed the truth. 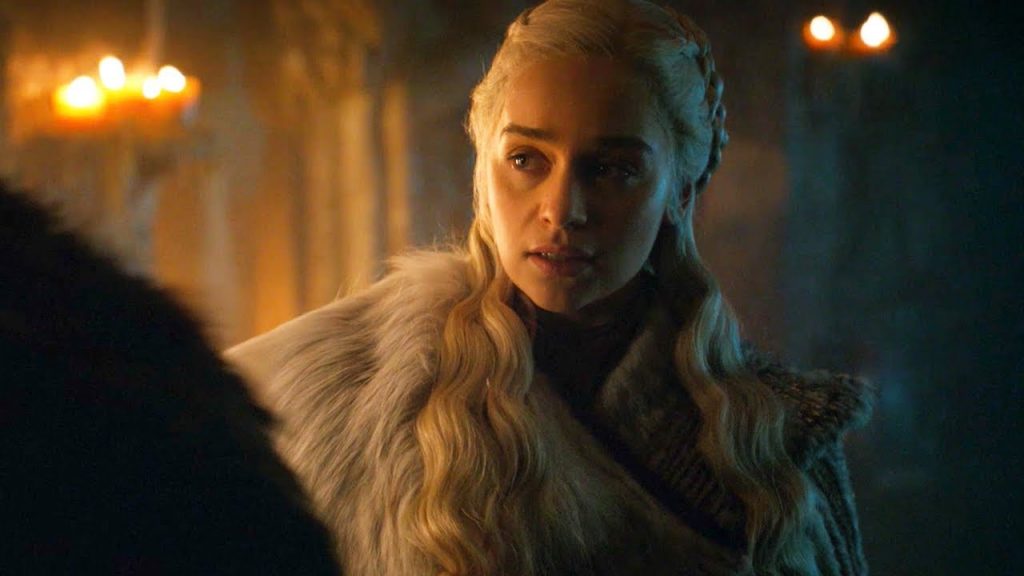 Daenerys started losing her mind, but tried her best to conceal her hurt and disbelief. After coming to the conclusion that Jon was speaking truth, Daenerys realized that Jon would next up for the throne, and not her. And that’s assuming that they win the battle against the dead and whatever evil plot that Cersei Lannister is cooking up over there in Kings Landing.

And again my Twitter timeline went crazy, as people pointed out that Daenerys was less concerned about having sex with her nephew and more concerned about losing the throne to a man. Yeah, of course that incest shit is nasty on all scales. But, being a fan of the show since day one, I knew that that incestuous culture was the norm for the Targaryens. It wasn’t out of the ordinary for them to marry off sisters and brothers, so Daenerys sleeping with her nephew wasn’t that big of a deal to her. But, I get it.

In the final scene, there was a montage showing all the couples in their current state throughout Winterfell, while Podrick’s vocals pierced through the night air, as he sang “Jenny of Old Stones”, which was also mentioned in the books, Songs of Fire and Ice.

Finally, to our dismay, we see the head white walkers (minus the Night King) and the army of the dead, who appeared to have pulled up right outside of the Winterfell gates. I have a feeling that shit will hit the fan pretty quickly as we brace for death and destruction in the next episode. 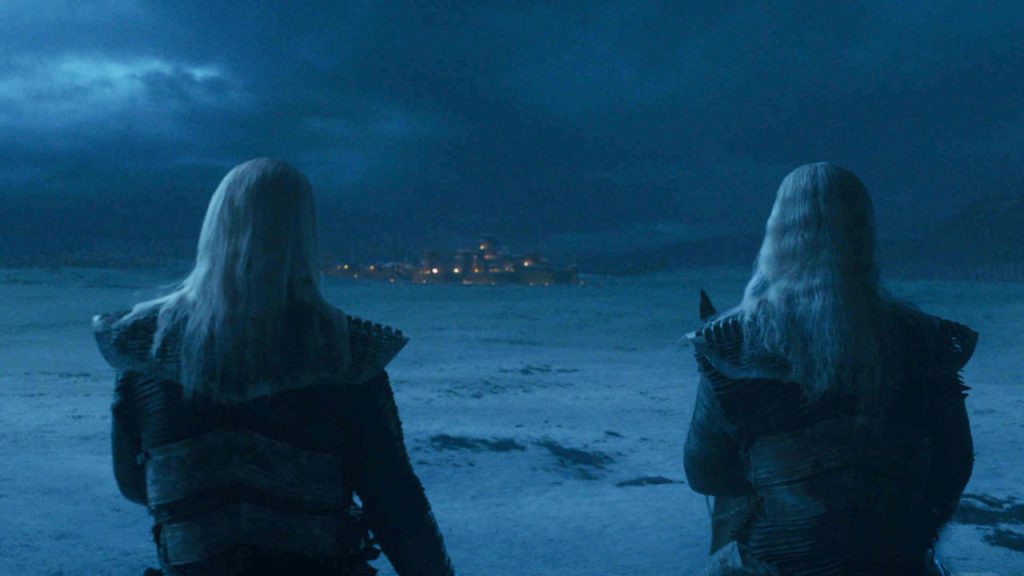 Game of Thrones, A Knight of Seven Kingdoms can be best described as the quiet before the storm. Click To Tweet

Everyone came together for a final night of peace before the battle begins. There’s no way around it; we’re going to lose some key players in episode 3.

It has been reported that it took 55 days for the show creators and director to set up and shoot the battle scenes. This is where I hope with all my little heart that we get our 90-minute episodes that we’d been promised since we found out that there were only going to be a total of six episodes for this final season. The way that this season is shaping up, I predict that the battle against the dead will make the Battle of the Bastards (Season 6 Episode 9) look like child’s play and I’m ready for every moment of it.

We don’t know much about the upcoming episode, other than a monumental killing spree is about to take place. Viserion is coming around the corner and Rhaegar and Drogon better be prepared. I pray that they’ve finally start eating; they’re going to need all the strength they can get to defeat their undead brother who’s controlled by the unpredictable Night King.

Also, what is Cersei Lannister cooking up with Qybure over in Kings Landing? Oh, it’s so much to think about in so little time.